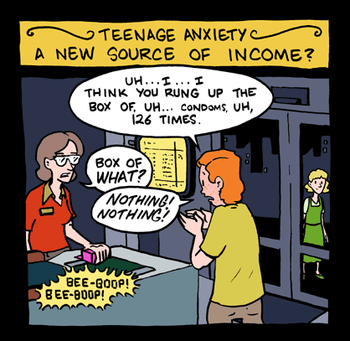 So your fantasy couple is finally going to consummate their relationship! Hooray for them!
Advertisement:

If the decision to have sex is a conscious, in-advance one, rather than a spur-of-the-moment twist near the end of an episode — and especially if it's going to be the character's first time (or the first time in a while) — the characters will often prepare. This means birth control.

The acquiring of said birth control is where this trope comes into play. For some reason, buying condoms or getting on the pill is made a torturous experience that explains why most sex on TV is hasty, unplanned, and thoughtless. The pharmacist will give a character a hard time about buying his condoms, or an unrealistically insensitive clinic worker will make going on the pill the most embarrassing thing possible. Even worse is if a parent or parent figure finds out, and instead of berating the character, supports their responsibility... often with humiliating advice and anecdotes. In comedies, this will be milked for all its worth.

Note that, should you ever be so lucky in real life, buying contraceptives is almost never like that these days if for no other reason than the advent of HIV & AIDS created a very strong imperative to make barrier sexual protection as widely and easily available as possible. You buy them off the shelf, and the person at the counter won't even glance twice at your purchases. (Unless, of course, you're buying only condoms, six feet of garden hose, Vaseline, maraschino cherries, and a rubber ducky.) And with self-checkout machines becoming widespread in the 2010s, it's even possible to buy them without interacting with another person. Between this and changing views on sexuality, this trope has largely become a Discredited Trope. However, not that long ago, it was normal for condoms to be behind the counter, so you had to ask for 'em. This was something of a rite of passage and sometimes is still considered this to a slight degree even today - the idea being that if you aren't mature enough to go and buy condoms by yourself, you aren't mature enough to be having sex either. In order to facilitate this trope (or at least its potential for hilarity ensuing) within these changing social mores, the trope may therefore be combined with A Simple Plan, in that what seems like the simple act of acquiring contraception will, through a collision of unrelated circumstances, become far more tortuous and complicated than it should be.

Nevertheless, many still see it as being a bit embarrassing—or at least a bit gauche—to buy condoms and nothing but condoms. For one, given that even in these more sexually permissive days sex is nevertheless still seen as a rather private and intimate affair, the more modest and shy among us might be at least a little uncomfortable knowing that at least one complete stranger is going to know that sex is likely to be in their immediate future. So often the purchase will be mixed in with a number of other items, e.g. toothpaste or soap. For comic effect, should the other items themselves be unfortunately or hastily chosen this may often lead to a serious case of Bread, Eggs, Milk, Squick, which in turn will also provide the possibility for ensuing hilarity and comic misunderstandings.

Of course, being able to get condoms doesn't necessarily mean they will always work.

A subtrope of Exposed Embarrassing Purchase. Compare Tampon Run, which is about buying tampons instead of condoms. Often involves a Cover-up Purchase.

A Price Check On Some Condoms

The ladies realize they'll need protection for their romantic getaway, but they're embarrassed to buy them. The cashier only makes it worse.

A Price Check On Some Condoms

The ladies realize they'll need protection for their romantic getaway, but they're embarrassed to buy them. The cashier only makes it worse.