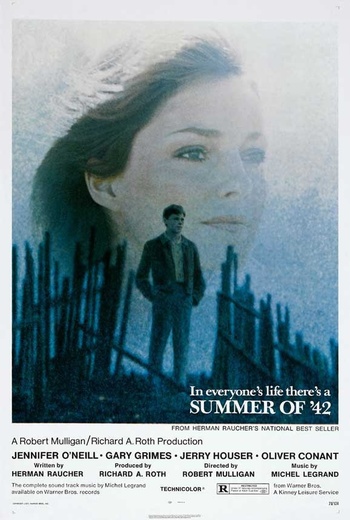 "And nothing, from that first day I saw her, and no one that has happened to me since, has ever been as frightening and as confusing. For no person I've ever known has ever done more to make me feel more sure, more insecure, more important, and less significant."
Advertisement:

Summer of '42 is a 1971 American comedy-drama film directed by Robert Mulligan and written by Herman Raucher. A Coming-of-Age Story based on Raucher's own experiences as a teenager during World War II, it is perhaps best known for providing the role of Jennifer O'Neill's career and for including that

Hermie (Gary Grimes) is a teenaged boy spending the summer of 1942 on an unnamed island that's a lot like Nantucket. Hermie and his friends — Oscy (Jerry Houser), the jock, and Benjie (Oliver Conant), the shy nerd — aren't too concerned with the war, but they are very concerned with sex and girls. When Benjie reveals that his parents own a textbook about sex, it is a major event in the the lives of the boys. Oscy begins putting the moves on a pretty blonde he meets at the movie theater. Hermie also meets a girl at the theater, but his attention is fixed elsewhere: on Dorothy (O'Neill), a woman at least ten years older than he is who has a cottage on the beach, and whose paratrooper husband has gone off to fight in the war.

In 1973, the film was followed by a forgotten sequel, Class of '44. It featured the return of Hermie, Oscy, and Benjie (all played by the same actors) but with no appearance by Dorothy (maintaining consistency with the original, in which Narrator Adult Hermie says he never saw her again).