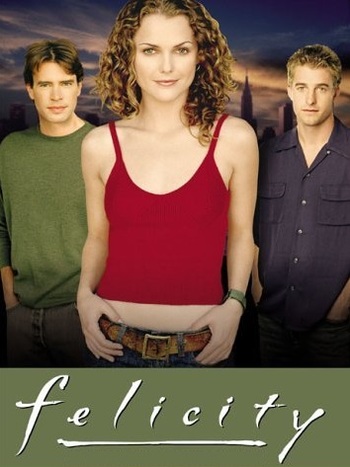 Felicity is a Coming-of-Age Story from Imagine Television and Touchstone Television, set at the University of New York and focusing mostly on the Love Triangle between the main character and her two on-and-off paramours Noel and Ben.

One of the strongest offerings in the WB's 1998 season, this show suffered a massive ratings drop in its second season. Executives reportedly blamed the newly-shortened hairstyle of the main character (a drastic response to a harsh breakup), and WB executive Susanne Daniels famously said of the show, "No one is cutting their hair again on this network".

Early episodes featured a unique framing device, in which Felicity would record an audio tape letter to her friend Sally at the beginning of the episode briefly highlighting the major events of her past week; at the end of the episode Sally's response (voiced by Janeane Garofalo) would be played.

With declining ratings each season, the show finally ended after its fourth season. The finale (and episodes leading up to it) integrated a Clip Show and Time Travel, and then turned out to maybe be All Just a Dream.

Created by a pre-Bad Robot J. J. Abrams and Matt Reeves, which explains a lot.