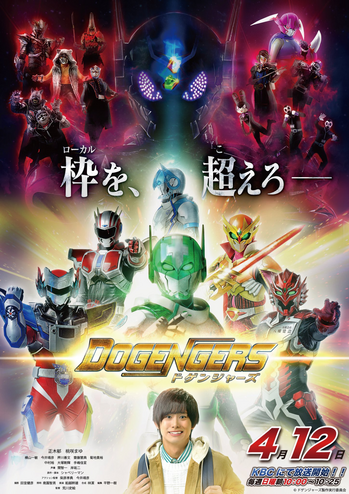 "The heroes are real, but the story is fictional."
In many regions of Japan, there are superheroes who are referred to as Local Heroes. Their job is to represent a particular prefecture or city and protect it from evil forces. One such prefecture is Fukuoka, home to many unique heroes; Fukuokalibur, who took his job very seriously; Kita-Q-Man, who doesn't want to fight because his suit is "too stiff', prefering to run at the first sign of danger; Heavenly Hero El-Brave, a fiery pro wrestling hero with height complex; Yamashiron, a soft-spoken mascot of Yamashiro Gas Company from Saga Prefecture (who happens to be a fusion of three people); and lastly Ohgaman, a pharmacist superhero who solve the leftover antibiotics problems rampant in Fukuoka.
Advertisement:

Time and time again these heroes defended Fukuoka from the evil Yabai Kamen, the bumbling CEO of Secret Society of Darkness, Inc.

One day, a normal young man named Jiro Tanaka moved from Tokyo to Fukuoka to see his childhood friend Yuki, whom he hasn't seen in 17 years. He was saved by Ohgaman when Yabai Kamen was about to do him in! Seeing some potential in Jiro, Ohgaman trusts Fukuoka's safety in his hands! Now as a hero simply known as "Rookie", can Jiro able to be the hero that saves Fukuoka?

DogengersNote "Dogengers" takes its name from "dogen" from the Hakata dialect, which means "Y'all". So the show can be translated as "Y'all Rangers". is an independent tokusatsu series that premiered on April 12th, 2020 and consists of 12 episodes. It's a crossover that brings together all of Fukuoka's Local Heroes into one show. The show quickly gain a small but dedicated following due to its quirky writing and respect to tokusatsu genre as a whole.

, officially titled Dogengers: Nice Buddy, was announced for an April 11th, 2021 release and aired on Tokyo MX, unlike season 1 where it premiered on KBC (Kyushu Asahi Broadcasting). It introduced a new hero named Great-Z, played by Katsuhiro Suzuki (Red Buster, Kamen Rider Quiz), with Mr. Kamen Rider himself Seiji Takaiwa serving as his suit actor. You can watch the trailer here

The Dogengers suddenly lose their popularity due to a scandal, thus canceling their highly anticipated second season. Now they are making a living doing stage performances in front of small audiences (consisting of their friends). Standing before them is a new hero of justice Great-Z, who announce that he's going to take Yabai Kamen and his cronies as villains for his upcoming TV show. In order to reclaim their popularity (and getting their second season Un-Canceled), the Dogengers must sneak in to this new show and save the Secret Society of Darkness from the clutches of Great-Z.

was officially announced on May 11th, 2021. For this season, the production crew held auditions for a female cast member aged 15 to 25, which would land the winner a spot as a new and important character of season 3. On January 10th, 2022

the third season's released date was officially revealed; April 2022, under the title Dogengers: High School. Along with the teaser visual the season also teased the winner of that audition, which was later revealed in an official press conference

as Sora Fujimatsu, an idol from the group MAGICAL SPEC from Toki wo Ikiru, playing the role of Mako Yamada. She transforms into the new hero MAKO with a sword haunted by a ghost named Kireko. The tagline for this season is "The story that 'changed' an 'ordinary' girl." The season will premiere on April 10th

, not only on Tokyo MX and KBC(the channel that originally aired season 1) but also Dogengers YouTube channel

for the first time ever. You can watch the trailer here

. This season also gives the Dogengers new members in Koujin Ex of Kagoshima (he made small appearances in the last two seasons) and "Charcoal Fire Warrior" Bincho Fire of Kitakyushu. In anticipation for High School's final episode, the official Twitter account announced

that all eleven episodes will receive English subtitles with the help of violinist Sho Omagari, known for his work on Final Fantasy and Kingdom Hearts.

"Take these tropes and sleep":