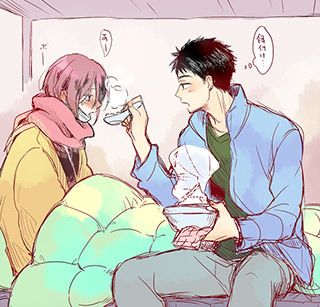 "I caught a bad cold one time when I was nine years old. The doctor whipped up a pot of garlic soup and brought it over himself."
— Tom Paris, Star Trek: Voyager
Advertisement:

Soup has been around for centuries, and lots of people eat it. However, this trope is when it is associated with illness somehow. In addition to being wrapped up in a blanket with a thermometer in their mouth and tissue boxes surrounding them, a common sign for how to tell when a character is sick to a viewer is to have them be eating a bowl of soup. Soup is often offered to or left on hold for sick people.

This convention varies a little by culture; for example, in the United States, it's usually chicken soup (particularly with Jewish families, leading to the nickname "Jewish penicillin"), in the United Kingdom it's often chicken or tomato, and in Japanese works, it's rice porridge (okayu). note While porridge isn't soup technically, it's often dubbed into soup and it's associated for the same reason as soup: it is easy to eat. It's also usually prepared really soupy indeed, with a lot more broth than usual. The trope can also be justified by the soup having magical properties that can cure the sick character.

There is an element of Truth in Television to this. Soup is, after all, rather nutritious (obviously necessary when fighting an illness) and the fact that it's mostly liquid (with the solid parts made soft and easy to chew by being cooked in liquid) makes it easier to be consumed and less likely to be vomited afterwards. In the case of a sore throat, the heat is soothing too. Since doctors often recommend that people consume lots of fluids while ill, a meal that is a fluid also helps follow those instructions. In addition to everything else, the Placebo Effect also applies here; most people agree that soup is good for you, and if you're of the right mind to believe it can make you better, your symptoms will definitely be relieved for a while. Needless to say, it's not a coincidence that sales of tinned soup tend to consistently rise around the depths of winter, when not only is it freezing outside, but your odds of catching a common cold is significantly higher.

It's sometimes paired with Appetite Equals Health: a sick character won't be hungry at all and won't eat anything, but once they're getting better, they'll try eating soup in small amounts and gradually they'll get better.

See also Sick Episode and Hot Drink Cure. If the characters' "illness" is emotional, then the soup falls under the category of Comfort Food. Of course, the best soup for what ails you is probably Grandma's Recipe.