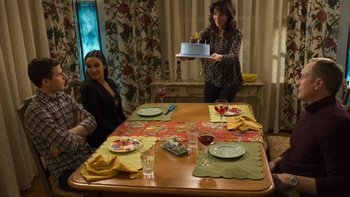 It's Jake's birthday and Amy is nervous because she's going to meet his mother Karen for the first time. Jake tries to reassure Amy that everything will be fine and the get-together is going well when his mother introduces an unexpected guest: his deadbeat father!

Meanwhile, Terry's taken Rosa and Charles out on a stakeout. Terry's nervous because his detectives have been chosen to field test the NYPD's new body cameras and he wants everything to go flawlessly. The cameras work as intended. Unfortunately, they also capture a little too much.

Also, Holt wants to take the detective squad to a team-building exercise at a room escape game. However, Gina forgot to e-mail the invitations and the only people she could get to come on short notice are Hitchcock and Scully.