Literature / Chicken Soup for the Soul 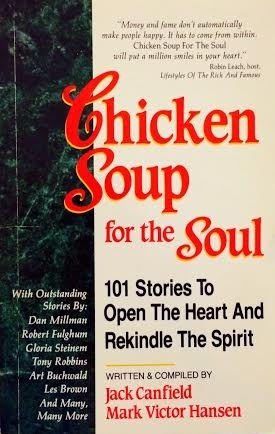 A long time ago, in 1993, Chicken Soup for the Soul, an anthology of stories compiled by Jack Canfield and Mark Victor Hansen, was published. They chose the included tales based on their inspirational and motivational value, and they chose the book's title for the reputation of chicken soup as a rejuvenating home remedy for various ills and for the desire to market the book as comfort food for the human spirit. Chicken Soup for the Soul was a great success to the point where it became the #1 New York Times bestseller. Its popularity then inspired multiple spin-off anthologies, all listed on an entire page

, courtesy of The Other Wiki.