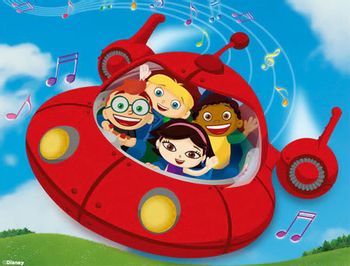 ♫ We're going on a trip on our favorite rocketship... ♫

We've got a mission! We need to read TV Tropes!

Little Einsteins is a preschool edutainment show based on the Baby Einstein brand. It was created by Baby Einstein and Curious Pictures. It debuted on the Playhouse Disney block of Disney Channel in August of 2005 and ended its run in mid-2010, quickly becoming one of the most popular shows on the block shortly after its debut. Little Einsteins focuses on the adventures of four gifted, young children, Leo, June, Quincy and Annie as they travel around the world in their friend Rocket and go on adventures called missions.

Each episode of the show follows roughly the same pattern. The kids would start the episode by introducing the audience to a piece of art and a piece of music which would involve somehow in the plot. The Einsteins would then go on a mission announced by Leo, to solve a problem, help someone, or find something.

The Einsteins would use Rocket to travel to different places, looking for clues and overcoming obstacles. They would then work together to achieve their goal, when Leo would announce mission completion. The show would then go to the curtain call, where the Einsteins would introduce themselves as well as giving the audience one more look at the art and music of the episode.

The main characters in Little Einsteins are:

Not to be confused with Young Einstein or Albert Einstein himself, though the production company does pay a royalty fee for the use of the Einstein name.

When it seems nothing could scare Rocket's hiccups away, a little mouse appears and suddenly frightens Rocket; this is what ends up scaring the hiccups right out of him.

When it seems nothing could scare Rocket's hiccups away, a little mouse appears and suddenly frightens Rocket; this is what ends up scaring the hiccups right out of him.