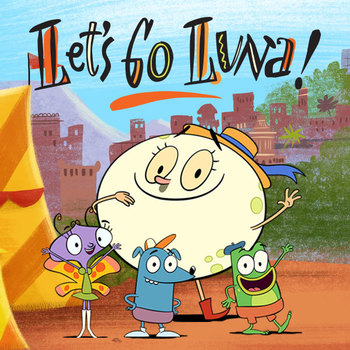 All around the world, let's go, Luna, let's go!note From left to right: Carmen, Leo, Luna, and Andy.
Leo: We live in a big beautiful world! I'm Leo.
Andy: I'm Andy!
Carmen: And I'm Carmen. Our parents work in a circus that travels all around the world, and we travel with them.
Andy: So we never know where in the world we will end up next.
Carmen: But wherever we go, we know that Luna the Moon will be there with us.
Advertisement:
— The show's Opening Narration

The Circo Fabuloso is a circus that travels around the world. Andy the American frog, Carmen the Mexican butterfly, and Leo the Australian wombat (with a Canadian accent) are a trio of children whose parents work in this circus. Along the way, Earth's Moon herself, Luna, guides the children throughout the countries the Circo stops in, teaching them about the various aspects of the countries' cultures.

of one episode. Two episodes were released early to PBS Kids' YouTube channel on October 22, and several segments were released on the PBS Kids website and video app as well.

The show was quietly renewed for a second season, which premiered on May 10, 2021. In October 2021, it was revealed

that the show will end in 2022 after 2 seasons and 64 episodes.note The Christmas special is counted as 2 episode production codes, so 9 Story claims that there is 66 episodes