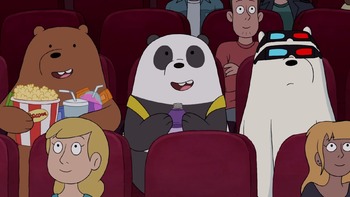 If you want your series to have a Show Within a Show, one way to achieve this is by having an episode where the characters go to a movie theater. The characters will encounter many challenges as they attempt to enjoy their experience. This can involve waiting in an obscenely long queue to purchase tickets, or struggling to find good seats. Expect them to go to great lengths to sneak in their own snacks, or be presented with a Shockingly Expensive Bill if they try to order them from the concession stand. In the auditorium, they might have to put up with a very disruptive movie patron, who talks during the movie, eats or drinks loudly, kicks the seat in front of them, or blocks the view of the patron behind them.

Drive In Theatres present their own challenges, such as finding a place to park, or dealing with blaring car alarms.

Compare Circus Episode and Casino Episode, other tropes about episodes in which characters go to places of entertainment.