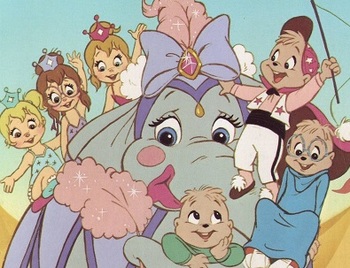 Everybody loves a circus, right? So what better way to add some colour and sparkle to a series than to have the characters join, or otherwise get involved with, a circus for an episode?

The circus episode provides an excuse for the producers to show off lots of circus acts. If any of the regular cast have talents in these areas, expect the plot to require their character to step up and perform in the show for some reason.

This trope mainly occurs in kid-oriented works because kids are more likely to find a circus setting appealing. When used in adult works, this is more likely to become a case of Subverted Innocence; beware if it turns out to be a Circus of Fear.

A common variation on police shows is for a crime (usually a murder) to occur in the circus, and the characters have to investigate.

The Flea Circus is the part of Lucy's mind that Ford created to suppress her real personality.

The Flea Circus is the part of Lucy's mind that Ford created to suppress her real personality.