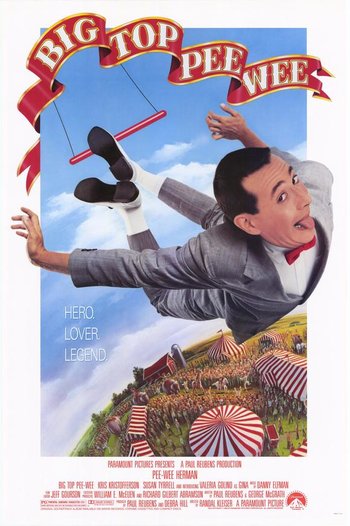 This not-sequel to Pee-wee's Big Adventure, released in 1988, draws a great deal of inspiration from the classic story Pollyanna, which Paul Ruebens had wanted to do with this film's predecessor. This time around the director is Randal Kleiser (who also directed Grease and The Blue Lagoon), so the film has a different style (not to mention that there's a lot of jokes and references reused from the earlier film and the Pee-wee's Playhouse TV show).

Pee-wee Herman lives in a farm, with his animal friends including a talking pig named Vance. He has also invented trees that grow hot dogs. One day, a tornado hits the farm bringing a bunch of displaced circus performers with it. The performers include ringleader Mace Montana; his 5-inch tall wife, Midge, and an acrobat named Gina (Valeria Golino), whom Pee-wee falls in love with, despite the fact that he is engaged to Winnie, a local school teacher. Also, many of the other townspeople and the sheriff are not happy with the circus being in town, and threaten to have Pee-wee arrested, but Pee-wee has a plan of his own.