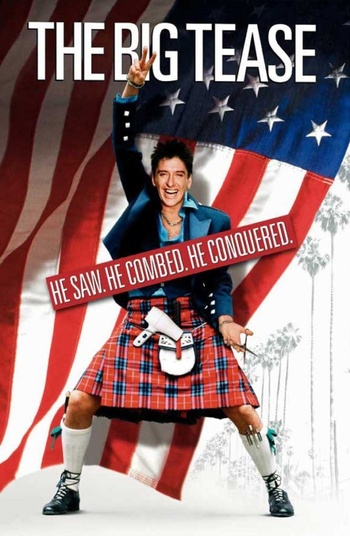 “It’s exactly like Braveheart, except it’s a hairdressing movie set in modern times, most of its indoors and nobody gets killed”.
Advertisement:

The story follows Crawford Mackenzie, a Glasgow hairdresser who, while being filmed by Martin Samuels as part of a fly-on-the-wall BBC documentary, is invited to the World Hairdresser International Federation's annual Platinum Scissors Contest. The documentary team follows Crawford to Los Angeles, where they discover that Crawford's invitation is for him to be a member of the audience rather than a competitor. Having spent a rather large sum of money just to get there, Crawford does not accept this state of affairs. Using charm, Blatant Lies and The Power of Friendship, he learns to jump the many hurdles that Monique Geingold (organizer of the contest) and competitor (and idol turned Arch-Nemesis) Stig Ludwigsen throw in front of his dream. Along the way he receives the help of Candy Harper (Sean Connery's publicist), Eamonn his limo driver, and various other L.A. folk.