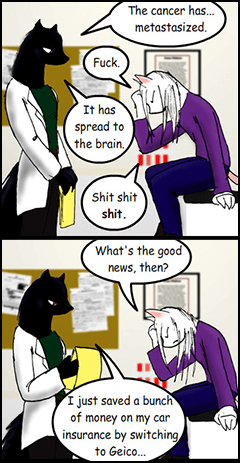 Wanda: Uh, Timmy, we've got good news and bad news.
Timmy Turner: What's the good news?
Cosmo: The alien we got you is actually a prince from the dreaded war planet Yugopotamia!
Wanda: And his parents are on their way to destroy the Earth and rescue their son.
Timmy: What's the bad news?
Wanda: Oh, wait... that was the bad news.
Timmy: [angrily] Then what's the good news?!
Cosmo: I found a nickel!
— The Fairly OddParents!
Advertisement:

A trope most easily employed with two or more characters who are in a Good News, Bad News scenario. After breaking the overwhelmingly bad news to the other, the messenger helpfully relays the good news: a Breathless Non Sequitur that has nothing to do with the dire situation. This usually results in effectively crushing the raised spirits of the receiver(s).

Maybe the messenger was just fulfilling his role as the comic relief, maybe he's a Jerkass with a really mean-spirited sense of humor, maybe he's self-centered and can't comprehend that others might not regard the irrelevant news as good, or maybe he's The Ditz and was thoroughly convinced that his piece of good news was every bit well placed. Whatever the case, the receiver is usually anything but amused.

Very likely to come up in Kent Brockman News. A related trope is Bad News in a Good Way. Compare Worst News Judgment Ever when the Irrelevant News is in the headlines. Also compare No Sympathy and The One Thing I Don't Hate About You.

Bronson reports what the search party found to Flint. Some of it is good, and some of it is not.

Bronson reports what the search party found to Flint. Some of it is good, and some of it is not.