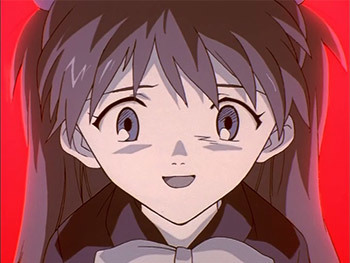 "Mama...?"
"What's with the face? It is happy, yet at the same time, disturbing."
— Mark Chang, Fairly OddParents
Advertisement:

Any Stepford Smiler worth her immaculately groomed Power Hair has a smile capable of withstanding a nuclear blast worth of shocking revelations with amazing Dissonant Serenity. Anything and everything could happen, the president is assassinated, the detective finds the basement graveyard, the in-laws visit unexpectedly, and still the smile stands.

Then there are times when that perpetual and creepy smile... breaks. Maybe the cookies got burnt, a lock of her hair has fallen out of place, or her perfectly manicured family just did something dreadfully embarrassing in public. The point is, it's the last straw and her smile, like her composure, has been shattered into so many pieces archaeologists will be puzzling it out for millennia.

Something snaps inside her head; she gets Hidden Eyes, and her smile suddenly becomes frozen and forced, with teeth grinding in a rictus of a Cheshire Cat Grin... or worse. The smile is only still there because the sheer shock has prevented any new expression from reaching her face. A deer in the headlights of a sixteen wheel semi has a similar expression. She may develop a twitchy eye. Occasionally accompanied by a Glass-Shattering Sound to help punctuate the situation.

Cross-Popping Veins optional for comedic examples. Usually this is followed either by a Heroic BSoD or something to make those responsible forever Beware the Nice Ones. Often shown by Yandere. Compare with Technically a Smile and The Un-Smile. Not to be confused with the Stepford Smiler, which is for a smile meant to unhappiness.