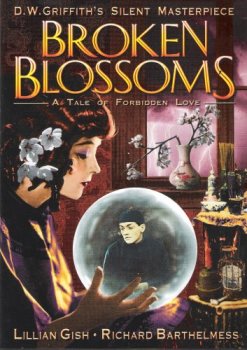 Broken Blossoms or the Yellow Man and the Girl is a 1919 film directed by D. W. Griffith and starring Lillian Gish, a tale of love between a Chinese man and an English girl, and very different from the far better-known The Birth of a Nation. It's also notable as the first film released by United Artists.

Chen Huan (Richard Barthelmess), a young Chinese man leaves his native homeland for the shores of England, as a missionary hoping to spread the teachings of Buddha. However, London quickly chews him up and spits him back out again, and he finds himself running a shop and drifting through opium dens. However, a chance meeting with the young Lucy Burrows (Gish), the abused daughter of well known boxer Battling Burrows (Donald Crisp), leads the two of them to fall in love. But when her father finds out, their love quickly turns into tragedy.

(there are also purple-colored, yellow-colored or sepia-colored versions there).