Film / The Brain That Wouldn't Die 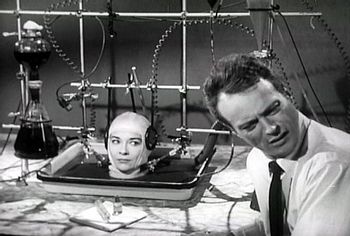 Dr. Bill Cortner (Evers) is a rule-flouting maverick who has been experimenting with the transplanting of human limbs and organs, and even the repairing and reconnecting of nervous system tissue — much to the displeasure of his traditionalist surgeon father. But Cortner gets a chance to prove he's not been wasting his time when his fiancée Jan (Leith) is decapitated in a car accident. Cortner quickly uses "neck-pan juice" to keep her head alive while he searches for an attractive body to reattach it to. Jan, however, has her own agenda...

The Tropes That Wouldn't Die: