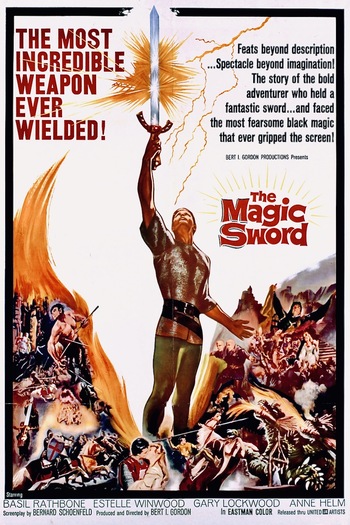 Sir George (Gary Lockwoodnote Frank Poole from 2001: A Space Odyssey) is the foster son of Sybil (Estelle Winwood), an elderly witch. Not much is said about his background, other than that his parents are dead and he is of Royal Blood. He is secretly in love with Princess Helene (Anne Helmnote (Mary Briggs on General Hospital)), who is kidnapped early in the film by the evil wizard Lodac (Basil Rathbone).

George wants to go on a quest to liberate his lady love, but Sybil believes he is too young. She comforts the youth by showing him a magic sword, a steed, a suit of armour, and a group of magically frozen knights — all his to command when he turns 21. But the impatient George tricks Sybil into a locked underground cellar and immediately takes off with his magical implements and the revived company of knights.

Sir George and his party then appear before the king, who looks like Grady from Sanford and Son, and insist on journeying to Lodac's castle to rescue his daughter, even though this angers the knight who had previously been given the task. To save the princess Helene, George and his companions must go through Lodac's seven curses.

This 1962 fantasy adventure film, directed by Bert I. Gordon and very loosely based on the legend of Saint George and the Dragon, later had some of its footage reused in The Man Who Saves the World.

Not to be confused with the Warner Bros. animated film Quest for Camelot, which was released as The Magic Sword in some territories.

For the Mystery Science Theater 3000 episode see here. RiffTrax released their own version on August 14, 2015.