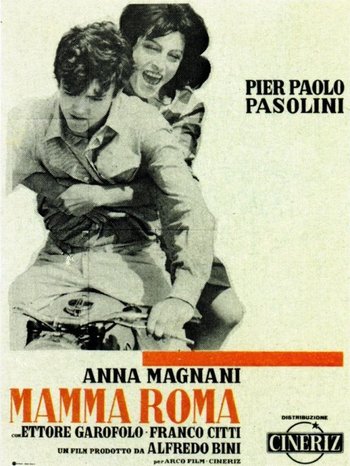 Mamma Roma is a 1962 film from Italy, directed by Pier Paolo Pasolini.

Mamma Roma (Anna Magnani) became a prostitute as a teenager when her husband was arrested (for being a Mussolini Fascist) on her wedding day. The marriage of her pimp, Carmine, leads Mamma to head for Rome. Eventually hooking allows her to save enough money to quit streetwalking and get a street vendor's fruit cart.

She sends for her son, Ettore, whom she left behind in the country when he was a boy of six. Unfortunately the smiling boy has grown into a lazy, sullen teen. Mamma is deliriously happy to have her son with her again. She gets him a motorcycle and a job as a waiter at a restaurant, but Ettore would rather hang out with his juvenile delinquent buddies. Managing Ettore is difficult enough, but when Carmine looks Mamma up again, tragedy strikes.