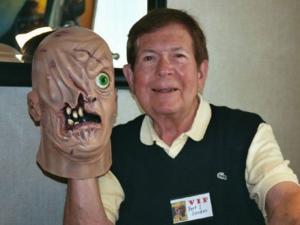 Bert Ira Gordon (born September 24, 1922) is an American B-Movie director probably best known as "The King of the Giant Monster Movie", alongside his wife Flora, from 1955-1990. Gordon is still alive and living in Kenosha, Wisconsin.

Eight of his 21 films ended up on Mystery Science Theater 3000; the most from any one director.

Films with TV Tropes pages (those featured in MST3K are labeled):