Film / The Man Who Saves the World 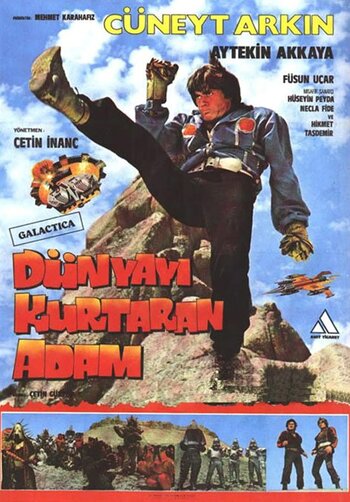 "Yes, the movie explicitly lists out two Turkish dudes as Earth's greatest warriors...and a bunch of other guys. I love how the movie refers to them as 'Turkish,' especially since it just got through telling us that notions such as race, religion, and nationality were outmoded concepts. Or maybe it's just telling us that in the future everyone's Turkish. Could happen."
— Noah Antwiler on

Dünyayı Kurtaran Adam (The Man Who Saves The World) is an otherwise obscure Turkish Science Fantasy Martial Arts film from 1982 directed by Çetin İnanç and written by and starring Cüneyt Arkın, that's better known in certain Internet circles for being So Bad, It's Good. It's more commonly known in these circles as "Turkish Star Wars", because it lifts much of its Stock Footage directly from Star Wars.

Very little is actually known about this film's history. Some believe it was just a local drive-in film, others think it was just shown in a few theaters, or maybe television — we may never know. But we do know that it was very likely not shown throughout Turkey, because of the whole plagiarism thing. (And also because you could watch the real Star Wars dubbed in Turkish.)

It definitely does not have fight scenes comparable to anything by Jackie Chan, but it does have guys jumping around and punching the stuffing out of overgrown stuffed animals. And it may not have special effects as good as Star Wars, but... wait, yes it does, it stole the footage.

The plot, as best anyone can tell, is this: It's the far future, and humanity has colonized space, and Earth has been destroyed multiple times. Two TIE fighter pilots, Murat (Arkın) and Ali (Aytekin Akkaya), get shot down after some kind of space battle, and crash land on a desert planet. They then get attacked by guys dressed as skeletons, but fight them off with their mad kung fu skills. Then they get attacked by other guys and get captured. The other guys work for an evil wizard, simply known as "The Wizard", who has some kind of nefarious scheme to conquer Earth, by using human brains. These other guys try to press the pilots into gladiatorial combat, but they fight back. They're forced to retreat when robots with guns show up. Along with the other prisoners, the pilots join some kind of underground resistance against the evil wizard. They get attacked by mummies and holy crap we're not even halfway through the movie and we haven't even mentioned the force field made from human brains yet.

You know what, the creators obviously didn't give this movie much thought, so why should we? Just bask in the film's mindless glory on YouTube, here.

A sequel, Son Of The Man Who Saves The World, was made decades later with many of the same actors.