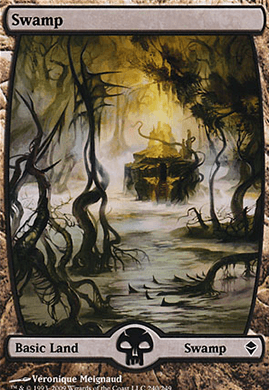 Doesn't look like the most friendly place, does it?
Westley: A few more steps and we'll be safe in the Fire Swamp!
Buttercup: We'll never survive!
Westley: Nonsense. You're only saying that because no one ever has.
— The Princess Bride
Advertisement:

In fiction, swamps are often portrayed as godforsaken places that no man enters willingly. When they aren't infested with undead horrors, they hide tribes of hideous frog-, lizard-, or fish-men (or possibly fishlizardfrogmen) who slink from their half-sunken temples to grasp the unwary with their cold hands and drag them beneath the still black water. At the very least, they are the home of poisonous snakes and strange, incurable diseases. Often, there are ancient curses that cause travelers to become lost and wander the swamps forever. A Will-o'-the-Wisp (also called corpse candles) may lead the unwary into quickbogs to die. Sometimes you'll run into a more humanoid creature that may be made from the swamp vegetation itself. For extra horror, people who get lost in the swamp may themselves become one of the monsters infesting it. Swamps are also a popular home for witches, voodoo ladies, families of inbred cannibals, zombies, hydras, and other unsavoury types.

There is an element of Truth in Television to this: swamps were long regarded as dangerous and unsanitary. They tend to attract a lot of insects, which can spread disease; the sodden terrain can make traversing them on foot difficult; many swamps are prone to heavy fog because of all the water, which can make it easy to get lost; and some swamps are also inhabited by dangerous animals, such as alligators, crocodiles, venomous snakes, and piranhas. More realistic depictions will have swamps as dangerous and unpleasant rather than outright evil. Expect lots of complaining about mud, leeches, and over-sized mosquitoes, and (in summer) the godawful humidity.

In real-world folklore, swamps were often regarded as cursed, haunted or full of Swamp Monsters. This is, of course, the basis for many fictional portrayals. That said, swamps, marshes, and other wetlands are an important part of the ecosystem, providing a habitat or breeding ground for many different species. Some are actually quite nice places to go birdwatching or fishing. Swamps are natural water level monitoring devices because in rainy times they collect rainwater like a sponge and thus prevent floods. In dry times swamps are water reservoirs.

In a Video Game setting, swamps will frequently be inhabited by zombies or carnivorous plants. Expect to find a lot of Grimy Water as a gameplay mechanic.

Compare Don't Go in the Woods and Hungry Jungle.

The Ever Grey Swamp

Eva and her lackeys Zull and Gort make their base at the Ever Grey Swamp, a region of the Pocket Kingdom no pet would dare to enter.

The Ever Grey Swamp

Eva and her lackeys Zull and Gort make their base at the Ever Grey Swamp, a region of the Pocket Kingdom no pet would dare to enter.