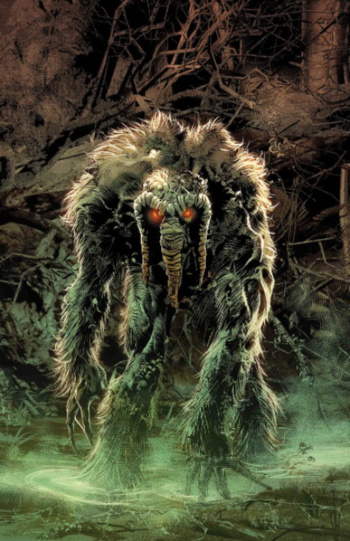 "What are you doing in my swamp?!"
Advertisement:

As we all know, Swamps Are Evil, and filled to the brim with dangerous animals, plants, and tribes. But sometimes, they are also home to something a little more nasty.

The Swamp Monster is a monstrous creature found almost exclusively in the swamp. It is where they have made their home and they will not or perhaps cannot ever leave. On the rare instances they do, they will likely return to their home eventually.

Expect them to be hostile towards any visitors unfortunate enough to stumble upon their territory, though on occasion benevolent swamp monsters do exist. They usually have the ability to stay submerged in the water, if the water isn't where they usually reside.

The exact nature of a Swamp Monster varies between different works, but common forms it takes include: