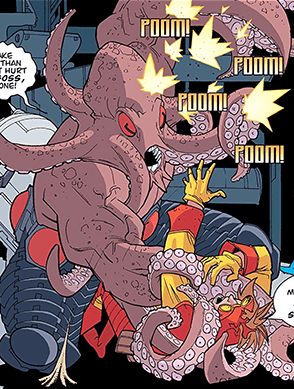 "Squid, cuttlefish, and other similarly baleful creatures are all members of the cephalopod family, characterized by HUGE EYES, BEAKS, INTELLIGENCE, and AMBITION. ... They're jet powered, did you know that? They're jet-powered animals and their heads are covered in PREHENSILE TENTACLES. They're carnivorous and most are cannibals!
— T-Rex, Dinosaur Comics
Advertisement:

Octopoids and other tentacled creatures are often depicted as terrifying monsters.

Squids and octopi dwell in the deep ocean where they can sometimes reach immense sizes, they move strangely with their incredibly non-human anatomy, and they are remarkably intelligent. But mostly, they have tentacles. These are usually seen completely alien and disgusting: they are slimy, have a whole lot of suckers, and move in an incredibly unnerving fashion. Given all these factors, it is only natural to see many works of fiction featuring creepy octopi as scary monsters the hero has to fight.

But it doesn't have to stop to mere cephalopods: some have noticed that cephalopod's tentacles are so creepy and unnerving that they could considerably crank up the horror meter of other monsters, and decided that they could be used on creatures even more menacing than actual cephalopods. Cue the various Mix-and-Match Critters like cecaelias, Cthulhu-like Eldritch Abominations and a plethora of monsters with entirely gratuitous tentacles. As far as non-cephalopod tentacled animals go, jellyfish are also prone to this trope- the fact that some of them really do look like they're from outer space

Super-Trope to Giant Squid. The Cthulhumanoid and Octopoid Aliens rely very often on this trope as well. May overlap with Stealthy Cephalopod when evil cephalopods are sneaky masters of disguise. Contrast (or sometimes overlaps with) Funny Octopus. Frequently overlaps with Combat Tentacles and the "Kraken" part of Kraken and Leviathan.

Examples of other Tentacled Terrors: