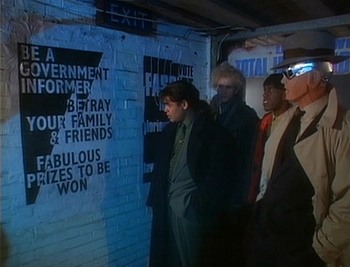 On an expedition to an ocean moon, the boys from the Dwarf find something alarming: Not only is there an abandoned Space Corp Seeding Ship filled with corpses, everyone and everybeing on-board has committed suicide. It's not long before Lister, Kryten and the Cat find themselves coming down with crippling depression. Rimmer, back on Starbug, has worse news: Something, the thing responsible for all the suicides, a gigantic squid monster, is coming for them.

Fleeing, the boys cram back into the 'bug and try fleeing. It doesn't work, and they end up crashing into an underwater cliff-face, killing them all instantly.

Game over. As in, literally, game over.

The four awake in a strange room, where a reassuring voice tells them that for the last several years they've been playing a fully immersive video game, as it welcomes them back to reality. All four are disoriented, but especially the former Cat, who's been saddled with ludicrously oversized buck teeth. A technician soon comes in, and asks them how they're doing. He's got some surprise revelations. Apparently, Lister was supposed to get Kochanski (in fact, it's the whole point of the game for him), and Rimmer was supposed to be a secret agent for the Space Corps, guiding Lister to his ultimate destiny as creator of the second universe.

The former boys are more than a little dubious about all of this, and concerned since their memories aren't returning, but they're quickly shuffled off to a nearby lounge, to try and figure things out while a new bunch of players take their place. Red Dwarf's a popular game, after all. In the lounge, they quickly learn their identities: The Cat is actually a sad, unfortunate nerd called Duane Dibley, Kryten is actually a cop named Jake Bullet, working in Cybernautics, Lister is an affluent man called Sebastian Doyle, and Rimmer is his destitute half-brother William.

Going out into the parking lot, the four discover the state of the world they live in, a world in the decades long grip of fascism, where the government offers fabulous prizes to people willing to inform on their families and friends. They find Sebastian's fancy car waiting, but before they can get in, they're distracted by an armed man chasing a child for stealing an apple. Not even Jake Bullet can pull rank, since Cybernautics is actually just traffic control. Then the man sees Sebastian, the "Voter-Colonel". As the Voter-Colonel, it's his job to "purify" democracy, mainly by killing dangerous voters. The man sees the child again, and opens fire... only to drop dead when Bullet shoots him.

Suddenly, things snap back to Starbug, where the four really are, stuck in a group hallucination, despite Holly's best efforts. In their fantasy, the group flee, "pursued" by the agents of the fascist government. They wind up in an alley, each despondent at their apparent lot in life, Kryten still massively overwhelmed by killing a human. At Duane Dibley's suggestion, they all decide to kill one another...

Fortunately, Holly manages to get a signal to Kryten, getting him to open up an emergency extinguisher. Before the crew can actually kill one another, they snap out of it. Turns out the Squid's toxin was responsible, pushing them into trying to kill themselves via sheer despondency, via subverting their natural traits. Cat, via his mind-melting shallowness, Rimmer by removing his ability to blame his parents for his crappy life, Lister by convincing him that he's a mass-murderer for a totalitarian state, and Kryten via his guilt.

As for the Despair Squid, Holly took care of it while the boys were out. ("Limpet mines. There's enough fried calamari out there to feed the whole of Italy.") With that done, and no reason to stick around, Starbug heads back to Red Dwarf.

After being convinced that they were just playing a VR game in a fascist police state, the Dwarfers are revealed to be hallucinating and running around like idiots in Starbug, much to Holly's annoyance.

After being convinced that they were just playing a VR game in a fascist police state, the Dwarfers are revealed to be hallucinating and running around like idiots in Starbug, much to Holly's annoyance.