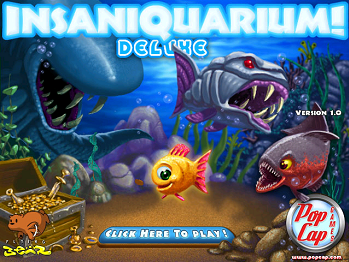 Insaniquarium Deluxe is a 2001 computer game, created by Flying Bear Entertainment. It was originally published by PopCap Games, but later taken up by a number of other publishers and based on Insaniquarium, which is similar, albeit simpler.

The basic idea: The player runs an aquarium, feeding and caring for cute little guppies that can poop cash

◊ which the player must collect while preventing said fishies from getting eaten by aliens who randomly invade your tank. There are a number of "pets"; invincible creatures with a variety of functions that can be earned as the player progresses through the many levels in regular mode.

In the Virtual Tank, an advanced version of the game, dollars have been replaced with shells, and more features are present: There are a few new pets, fish with different moods, new food items, and fish with special attributes.

Note: The pets' and aliens' stories can be considered spoilers since they are accessed later in the game.