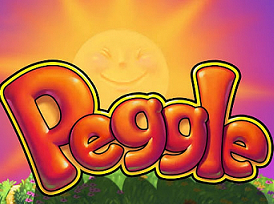 Yeah, sure, Mr. Sun. Drug dealers smile like that, too.
"I started playing Peggle around noon and emerged some time later to find that the authorities had declared me legally dead."
— Yahtzee Croshaw from Zero Punctuation reviewing Peggle.
Advertisement:

The goal is simple: you're given ten balls and you have to knock out all the orange pegs on the screen by bouncing the ball off the various pieces of scene geometry. Succeed, and you're off to the next level. Beat all the regular levels and you can then try your hand at the challenges, which are the same levels, but with certain conditions that must be met to beat the challenge. Conditions include getting a certain minimum score (harder than it sounds), playing a variation of the usual level with more orange pegs than normal, or clearing every single peg to name the three most common ones.