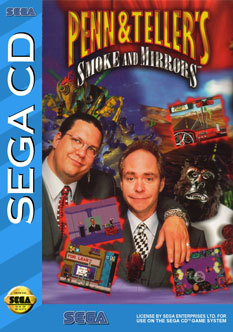 Penn and Teller's Smoke and Mirrors is a 1995 game featuring illusionist duo Penn & Teller. It was made for the IBM Personal Computer, 3DO Interactive Multiplayer, and Sega CD. Although the game was completed, it was unreleased when its publisher, Absolute Entertainment, went bankrupt, although the game had appeared in gaming publications beforehand. It resurfaced years later when an owner to a website that documents unreleased games received a copy of the Sega CD version from an initial reviewer.
Advertisement:

The game is a collection of minigames, and is intended as a commentary on the perception that video games are harmful. As a Penn and Teller product, the game is humorous, and features their usual mix of illusion and debunking of fraudulent uses of such. Several of the minigames are actually meant to fool the second player in some way and there's hidden menus to set up and practice some of the tricks beforehand.

The game consists of the following mini-games:

The minigames contain examples of: