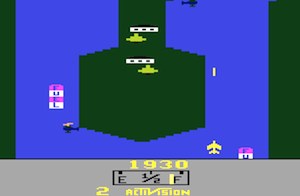 River Raid is one of the first Vertical Scrolling Shooter games. Originally developed for the Atari 2600 and released in 1982 by Activision, then ported to several other platforms.
Advertisement:

You fly a One-Hit-Point Wonder fighter plane down a river, shooting at ships, helicopters, and planes, and trying to avoid death by Collision Damage. As you get close to the ships and helicopters, they start moving back and forth across the river. The planes fly across the screen and Wrap Around. You will also die if you hit the riverbank or run out of fuel. The river is divided into sections, separated by bridges. You have to blow the bridge to pass into each section. Fortunately, the bridges and all the enemies are one hit point wonders too, so it's easy to cut through them.

Some sections of the river are straight, but in others, it splits in two, and you have to carefully fly down a narrow channel, then get back to the center once the two channels join up again. You also have to worry about fuel; your plane goes through it quickly, and will crash if you don't use the refueling stations scattered along the river. You can blow these up before you get to them, so you have to be careful about your shooting.

Known for its endless, never random, always changing map, generated procedurally. Also known for being programmed by Carol Shaw, the first female programmer in the industry.

A sequel, River Raid II, was developed by Imagineering and released for the Atari 2600 in 1988.