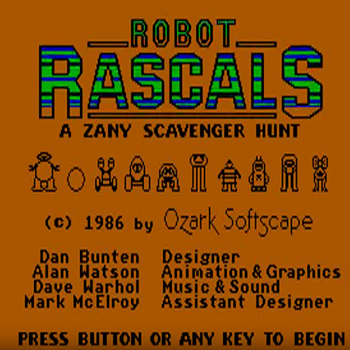 Robot Rascals is a 1986 turn-based multiplayer game for DOS PCs by Ozark Softscape, which emulates the concept of a Scavenger Hunt.
Advertisement:

It simply tasks up to four players in looking for items pertaining to whichever cards they have. Each player picks one out of 10 available robots as their Player Character, and then moves their robot to a different part of the map each turn, which consumes some of their initial energy supply. The players can also scan for the items they're supposed to be hunting for, or can obtain a list of advantages/disadvantages the players have from their position on the field.