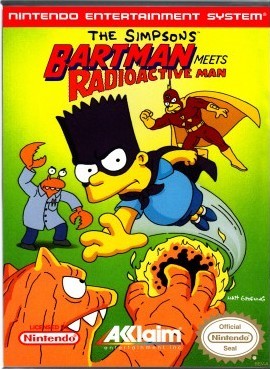 The Simpsons: Bartman Meets Radioactive Man is the third Licensed Game based on The Simpsons, released on the Nintendo Entertainment System and the Game Gear. It was developed by Imagineering and released by Acclaim in December 1992.

Radioactive Man has been imprisoned in the Limbo Zone, which revolves around a black hole. While reading a comic where the hero doesn't appear, Bart meets Fallout Boy and he tells Bart about the situation. Bart becomes Bartman, and heads out to save Radioactive Man. To do so, he has to battle three supervillains, recovering Radioactive Man's stolen powers and returning them to the superhero before taking on Brain-O the Magnificent.