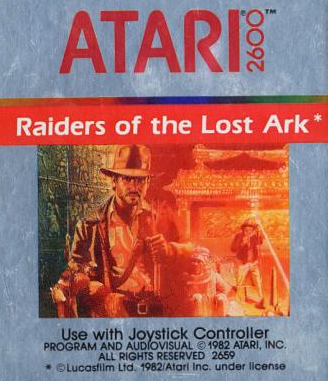 Raiders of the Lost Ark is a very loose adaptation of the movie for the Atari 2600, written by Howard Scott Warshaw and released by Atari in 1982.
Advertisement:

While it is very much a product of its time, complete with Flip-Screen Scrolling, it is also notable as one of the earliest examples of an Action-Adventure game. It also had the unique gimmick in that it required two joysticks to play, one to move around and the other to use items.

Raiders of the Lost Ark provides examples of: