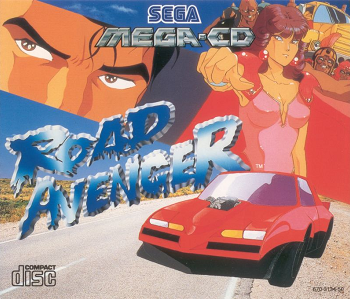 I know I'm gonna revive... When I am... on the road. I've got nowhere to hide... When I am... on the road.
"Hi! How are all you fans out there? Yeah, this is radio D-A-T-A, with the hottest hits today! Bright and sunny out there. You all having fun? You all know about the gang's busting up the city? Geez, I wish someone would blast them. Hey, here's some good news for you. You all seen that red supercar running around? Yeah, that's the one! He's our man! Yup, he's blasting them sky high! Hey, red supercar! Can you hear me out there? The gangs are running wild again. Hurry man, we need you! We need you fast!"
Radio Announcer, Road Blaster's demo mode
Advertisement:

Road Blaster is an animated Interactive Movie for the arcade that makes use of LaserDisc technology. It was developed for release in August of 1985 by Data East, while animation was provided by Toei Animation. This cooperation had produced Cobra Command only a year prior, and that game's Rail Shooter gameplay was adapted to Vehicular Combat gameplay for use in Road Blaster. Road Blaster is also known as Road Avenger and Road Prosecutor, which are the names of the original Western home console releases.

In 199X, the USA's been having a problem with vehicular gang violence. The unnamed protagonist is one of the top agents in the mission to take down the gangs. In response, the gangs unite and the leader organizes a hit on the protagonist. On his wedding day, when he's driving off with his now-wife, the gangs strike. The protagonist survives, yet his wife doesn't. Hellbent on revenge, the protagonist turns vigilante and goes after each gang member involved in the hit personally.

The action and aesthetic of the game take influence from the Mad Max series, and given the timing it's not out of the question that the female gang leader was inspired by Aunty Entity from (promotional material of) Mad Max: Beyond Thunderdome. Said gang leader ranks among the first female main antagonists in video game history.

Road Blaster was released in arcades worldwide and made its home console debut in 1986 on MSX. In 1992 and 1993, Wolf Team brought the game to Sega CD in Japan, North America, Europe, and Brazil. For this release, a theme song performed by The Jaywalk in both Japanese and English was added. Pioneer LaserActive, Sega Saturn, and PlayStation followed in 1995, after which it was quiet until 2009 with the Sharp X68000 and Microsoft Windows releases. The last release for now is the 2011 iOS version. A curiosity of the many releases is that for almost each one the dashboard was redesigned for a total of six variations.

Road Blaster was adapted as a novel, called "The Road Avenger", by writer Mary Margaret Park in 2009.

Road Blaster is a Spiritual Successor to Cobra Command and in honor thereof the LX-3FX chopper makes a cameo in stages 2 and 5. The director of both games, Yoshihisa Kishimoto, went on to work on Double Dragon I. Repeating the vehicle cameo, the red car from Road Blaster is stationed in the garage of the Lee Brothers and has done so each game following.