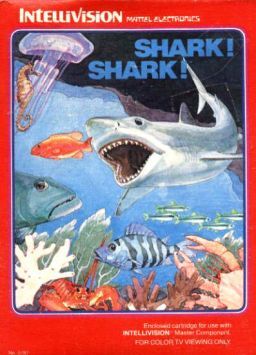 Shark! Shark! is a Video Game by Don Daglow, with additional programming by Ji-Wen Tsao.note One of the first female game designers.

The game has you play as a little yellow fish. The object of the game is to eat other fish and grow bigger, allowing you to eat bigger fish who would've eaten you otherwise.

Of course, sometimes, a shark will appear on-screen and start swimming about. The game IS called "Shark! Shark!" after all. You can either avoid the shark until it leaves, or you can decide to take on the shark.