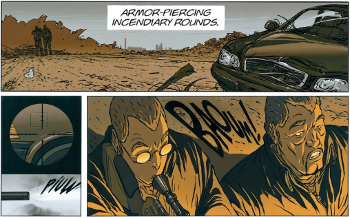 "Blowing up a car is a lot harder than it looks in the movies. Puncturing both sides of a fuel tank to draw in the proper amount of oxygen is a million-to-one shot. Thankfully, I'm a pretty good shot."
— Cyclops, X-Men
Advertisement:

In fiction, shooting a fuel tank makes it explode. This makes for an effective tactic in battle, as it's filled with nitro, in addition to the gas.

This myth was busted by MythBusters as they proved

that in most cases it simply will not work. A real-life fuel tank explosion was only possible when they used a minigun armed with incendiary rounds which, suffice to say, is generally unlikely. Besides, if you have a minigun then you're not going to need to shoot the fuel tank anyway. Even if (against all odds, logic, and reason) the fuel tank does explode, the result is rarely the spectacular car-flipping fireball that Hollywood promises. An ordinary passenger car's gas tank with unleaded gasoline will produce a "POP" and a quick (and anticlimactic) flash of flames underneath the vehicle with all four tires remaining firmly planted on the ground, though the resulting fire may consume the vehicle pretty quickly. Diesel pretty much won't blow at all unless you light a fire under it and keep it burning until it causes a BLEVE (Boiling Liquid Expanding Vapor Explosion), which will take a while to accomplish. Jet fuel's extremely-high ignition temperature causes it to behave a lot like diesel. Avgas (aviation gasoline, the super-high-octane blend used in piston-engined aircraft) can blow up like this (with a very Hollywoodish fireball), which is why airplanes since the 1920s have things like self-sealing fuel tanks and inert-gas-pressurization for their tanks.

It is important to note that, while conventional bullets or even tracer bullets do not often generate the heat required or have enough surface area to diffuse this heat fast enough to ignite fuels like diesel or jet fuel, white phosphorus rounds, like those shot from the Lahti L-39 Finnish 20mm Anti-tank/Anti-aircraft sniper rifle (more commonly known as the "Elephant Gun") or the minigun wielded by the Mythbusters, are more than capable of both penetrating the outer shell and fuel-tank wall of the vehicle they are hitting and delivering enough heat to cause an explosion. Of course, the behavior of the vehicle during the explosion is still the same, aside from getting quite a significant jolt from the impact of a 20mm rifle round traveling at 800m/s (similar to the muzzle velocities of some naval cannons).

This is about deliberately shooting a fuel tank. For vehicles that explode on any kind of incidental impact, see Every Car Is a Pinto. This trope also has some overlap with Bullet Sparks; see that page for the fairly limited number of ways this can be a Justified Trope. When this happens to a flamethrower's fuel tank, this is Flamethrower Backfire. If shooting or otherwise rupturing a pressurized tank sends it streaking away like a meteor, that's Gas-Cylinder Rocket. Compare Pop the Tires for a more practical method of disabling a vehicle.

In the intro slash tutorial level "Siege of Tobruk", the game gives Karl Fairburne a target to shoot at: an Opel Blitz truck armed with AA guns. Shooting the fuel tank of this truck is necessary to kill the final artillery spotter hiding behind said truck. Also demonstrated is the series' staple, the sniper bullet cam, which shows the bullet traveling from the rifle to its intended target.

In the intro slash tutorial level "Siege of Tobruk", the game gives Karl Fairburne a target to shoot at: an Opel Blitz truck armed with AA guns. Shooting the fuel tank of this truck is necessary to kill the final artillery spotter hiding behind said truck. Also demonstrated is the series' staple, the sniper bullet cam, which shows the bullet traveling from the rifle to its intended target.