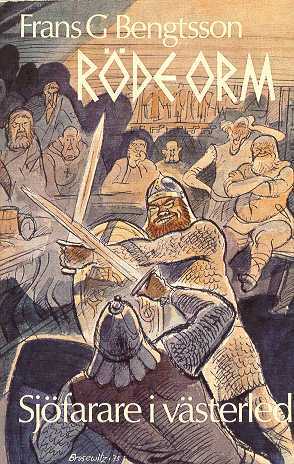 The Long Ships (original title Röde Orm) is the most famous work of Swedish author, poet and translator Frans Gunnar Bengtsson. The book is an adventure novel written in somewhat of the same style as The Icelandic Sagas, and chronicles the life and voyages of Orm, son of Toste, known as Red Orm. The novel was published in two parts. The first appeared in 1941, the second in 1945. The action takes place in the years 982 to 1007.

Orm is the youngest son of the Scanian chieftain Toste, and is kidnapped as a young man by raiders, and goes a-viking to Spain, where he is captured, and later becomes a member of the lord Almansur's bodyguard. After an incident where he kills the slavemaster from the galley, who killed his chieftain, he is forced to flee.

Was adapted into a series of four Comic Book-albums, between 1999-2004, by Charlie Christensen of Arne Anka fame. A movie adaptation was made in 1964, which more or less had nothing to do with the source material except the name. It has also been performed as a Radio Drama in the 90's.

A new movie as well as a TV-series has been talked about since the 80's and in Development Hell since 2011. Originally, a Swedish company was going to do it, but the rights were then sold to Lars Von Triers company, Zentropa. So far there's been no movie, but it was turned into a stage play, which apparently was the biggest one in Danish theater history.