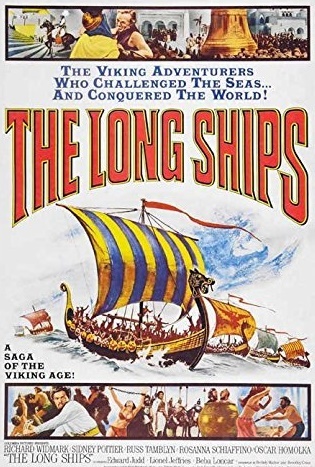 The Long Ships is a 1964 British–Yugoslav adventure film shot in Technirama and directed by Jack Cardiff, who was the cinematographer of The Vikings. The picture is very loosely based on Frans G. Bengtsson's novel The Long Ships, as it retains little more than the title of the English translation and the Moorish setting.

The plot is set in the 10th century and concerns several parties in search of a fabled immense golden bell that was cast in the Byzantine Empire then hidden somewhere.

Moorish sultan Al Mansuh (Sidney Poitier) is convinced that the bell exists. Having collected all the legendary material about it that he can, he plans to mount an expedition to search for it. When a shipwrecked Norseman, Rolfe (Richard Widmark), repeats the story of the bell in the marketplace, and hints that he knows its location, he is seized by Mansuh's men and brought in for questioning. Rolfe insists that he does not know more than the legend itself and that the bell is most likely only a myth. He manages to escape by jumping through a window before the questioning continues under torture, and makes his way back to Scandinavia.

Once he's back in Scandinavia, Rolfe gathers a crew with his younger brother Orm (Russ Tamblyn), kidnaps his king's daughter and "borrows" his king's funeral long ship and returns in Moorish territory to find the bell before Al Mansuh.