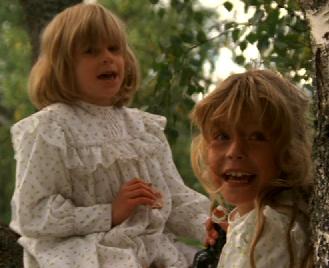 Madicken is a character created by Swedish author Astrid Lindgren. She appears in two novels and a short story which were adapted into a TV series in 1979 and a movie in 1980. English translations have given her several different names; the British translation of the books names her "Mardie," while the American translation calls her "Mischievous Meg," and the English print of the movies names her "Maggie."
Advertisement:

Madicken is an upper middle class girl, who lives with her parents and sister on the outskirts of a small town in Sweden in the 1910's. Her father is the editor-in-chief of the local newspaper and unconventional in so far as he tries to draw his children's attention to social issues and injustice. Madicken is seen as a difficult child because of her temper and her many adventurous ideas that often get her in trouble, but she also has a kind heart and can't stand to see someone else unhappy. Other characters include Madicken's baby sister Lisabet, who admires Madicken's courage and gradually develops a mischievous side, the mother, who is often exhausted by her daughter's energy and stubbornness, the nanny Alva who often deals with the children's day-to-day issues, and Madicken's neighbour and friend Abbe and his parents.

Notable because while Lindgren depicts an idyllic and sheltered childhood for the main character, the book also addresses many social issues through the family's neighbours and a poor classmate that always tries to pick fights with her.