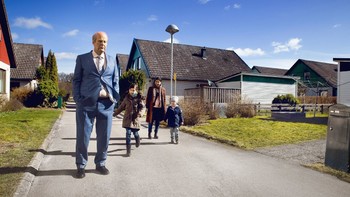 A Man Called Ove is the bestselling debut novel of Swedish author Fredrik Backman. It tells the story of Ove (pronounced "Oo-veh"), curmudgeon and neighborhood wet blanket, who wants nothing more than for things to be the way they always have been, for people to follow simple rules and to be with his wife. He is unwavering in his belief that the only type of car worth driving is a Saab, he has no understanding for young people today who do not even know how to brew a normal cup of coffee and even though he was removed from his position as chairman of the Residents' Association years ago (an event Ove himself only remembers as "the coup d'etat") he still makes his daily rounds to make sure nobody is parked in the wrong place and that the garbage is put in the right bin.

When a boisterous young family moves in across the street - and flatten Ove's mailbox in the process - it sets off a chain of events that turns into a comical and heartwarming tale of unkempt cats, unexpected friendship and the ancient art of backing up a trailer. Along the way the reader gets to know Ove and gets to see all the sides to him that his grumpy exterior do so well to hide. And one cranky man and a Residents' Association are changed to their very foundations.

In 2015 a film adaptation was released, directed by Hannes Holm, starring Rolf Lassgård. It received two Academy Award nominations, for Best Foreign Language Picture and for Best Makeup and Hair Styling. As of 2018, an English language adaptation is in the works, starring Tom Hanks as Ove.