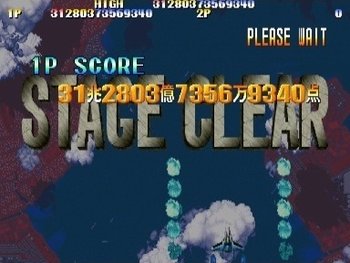 31 trillion points!
"Scoring is quite unique in pinball; the game is notorious for being generous with "points," a unit of measurement analogous to the hay-penny, the microsecond, and the nano-meter — they are all units of measurement that are too utterly small to be of any use whatsoever."
— RinkWorks, "Lights and Noises"

In most sports and a number of video games, Scoring Points is the best way to keep track of your success. But when you think about it, what is a point? Can you quantify its value? Is a point in one game necessarily as valuable as a point in another game? Think about such things long enough, and you may come to the conclusion that a point is really nothing more than a bizarre variation of currency, easily redeemed for fame and glory.

And like currency, it can be subject to Ridiculous Future Inflation.

Some games are simply more generous with their scoring systems than others. Some games will give you 10 points for an action that would earn you 100 points in another. Zeros are particularly easy to append to scores, and many games (especially old ones) do exactly that: display extra trailing zeroes that are never counted internally. Yet in the end, the extra powers of 10 are meaningless and serve only to make one's performance look that much more impressive.

If the game is in Japanese or Chinese, scores will sometimes have digit separator kanji to keep scores readable. 万 (man) is ten thousand, 億 (oku) is one hundred million, and, if you're lucky, you may see 兆 (chou), or one trillion.note (Unlike in the West, East Asian languages subdivide numbers four digits at a time, rather than three.)

There is a practical variant of this technique, in which the smaller digits, meaningless for scoring as many points as possible, are used to count something specific. Examples include number of combos hit, or times you continued when your game would otherwise be over. When used this way, the score is really more like two scores placed end to end.

One reason these inflated point counts happen is due to a handful of natural human biases. We like big numbers, yet are also somewhat bad at them, especially in comparison on the fly. 10 is more than 1. 10,000 is basically the same as 1,000 (as far as a ratio goes), but it seems like a lot more at first glance. Even when we start to break it down, we can trigger various human faults over how much we're getting and how much there is actually. It's very likely that early pinball designers inflated scores purely for the ability to state that you can earn more points than a competitor's and thus players of said machine were better despite, as this trope points out, it being an arbitrary distinction. Of course, once we start doing this sort of inflation, we also tend to move our internal definition of 'average'; a pinball machine that gave you scores in the 10s would, at first glance, look and feel much less impressive without some sort of context to justify it.

Meanwhile, the extremely quick succession of hundreds of small numbers on a scoring readout or on a screen has both a purely visual appeal and utility. Not only it communicates a feeling of achievement, but it also makes the whole process more dynamic and provides important feedback (not unlike flashing lights and other telltales in pinball and action games - the feedback even scales, with more decimals places flashing meaning better result). The ultrafast numbers also connect with a host of stereotypes - from a frantic rush of a million-dollar jackpot to nail-biting sports programmes where one-thousandths of a second decide the winner. Finally, from game design standpoint, more granular points allow for more intricate scoring rules. Soccer has 1s, basketball has 2s and 3s, but in a videogame, you can land a hit that satisfies six different conditions and is multiplied by two different modifiers, plus a randomized factor. This means that a score doesn't have to be legible, but after the game, it must cumulatively measure the exact merit of a current playstyle - with sports-like precision of fractions of a percent.

Idle games tend to take this to the extreme, with typical games like Cookie Clicker often having counts eventually ranging from the quintillions to the decillions. Some games come very close to the 1.8e308 limit of a floating point double; other games like Antimatter Dimensions have custom code to go beyond this limit, and even the exponent becomes subject to pinball scoring, with numbers like 1e200,000,000 becoming commonplace. Idle games released in the early 2020s have used notations that include more es to raise 10 to additional powers of 10 and then the exponent as a way or the F notation to show how many times the number is raised to the power of 10, like Exponential Idle letting you gain over ee40,000 dollars (that's 10^(10^40,000)), or The Prestreestuck instead making the point limit F1.8e308 (the number next to F showing that it's 10^(10^(10^(10^(10... repeat 1.8e308 times). This has the effect of undermining the "idle" component, as a year's worth of passive play might be equal to only an hour's worth of active play, as upgrades increase the rate of increase exponentially.

The point-value equivalent of Rank Inflation. Compare Money for Nothing, where this applies to currency instead of points. The same reasons apply, though; we feel special and powerful if we can casually buy something that costs 1500 (whatevers)... even if the relative value would make it equivalent to a 15 point item using a reduced currency count. See also Advanced Tech 2000, another area in which extra 0s are added for the Rule of Cool.