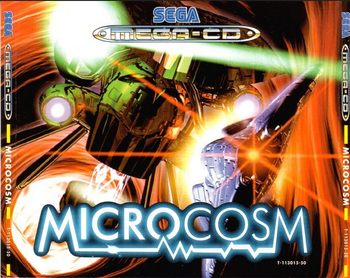 Microcosm is a video game published by Psygnosis, released on PC and Sega CD. It was heavily advertised to being a game that verges on being both a fully interactive video game with Hollywood-style visuals and an interactive movie with the play-ability of any video game. The PC version especially makes sure to advertise it very well, as well as make its packaging stand out broadly (a square donut-shaped box with the game in the middle). If you persevere past its marketing and its attempt to sell itself to your face, you'll find that it's a bad to mediocre Rail Shooter similar to Star Wars: Rebel Assault. On top of being frustrating, it is littered with poor design choices and eventually fell into obscurity.
Advertisement:

The story revolves around two companies- Axiom and Cybertech- who are at war with one another in a cyberpunk future. Axiom's scientists kidnap Cybertech's CEO and inject him with microscopic robots. The player controls a submarine pilot who is shrunk to microscopic size and injected into the CEO's bloodstream to save him from the nanobots.

Oh, and there's a small novel's worth of completely pointless information about the history of an entire fictional solar system in the instruction booklet for some reason.

The game later received a pseudo-sequel in the form of Novastorm.