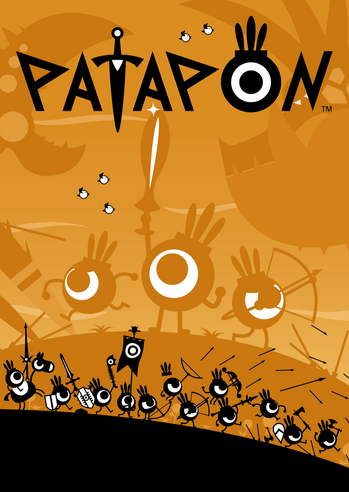 Part Rhythm Game, part tactical war game, part ear worm, pure fun, Patapon is a game by Sony Computer Entertainment for the PlayStation Portable that has you as the deity of a tribe of eyeball villagers, the titular Patapons, waging war in their quest to reach Earthend and gaze upon IT.
Advertisement:

The main gameplay of Patapon has you issuing orders to your army of 'Pons via four drums, each corresponding to a button in your joypad. There are plenty of commands, each with preset drum sequences, that you have to input in time with the rhythm to successfully issue an order (Advance, Attack, Defend, and Run Away, among others). When you successfully enter your orders in time with the rhythm, your army can then enter into a "Fever mode", greatly increasing their effectiveness in battle.

There are also other rhythm minigames back in your Patapon village that you can play to either acquire materials or currency (Kaching), used to upgrade your army.

It spawned two sequels, featuring more units, a Hero Unit, a multiplayer option, more minigames, and new enemies to conquer. Patapons 1 and 2 received remasters for the PlayStation 4 in 2017 and early 2020, respectively. Only time will tell if Patapon 3 will be remastered for the Playstation 5.