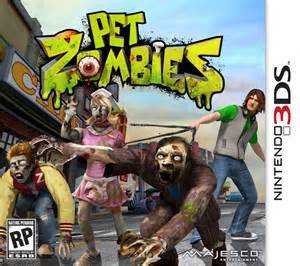 Pet Zombies is a Nintendo 3DS game published by Majesco Entertainment and developed by 1st Playable Productions that lets players raise their very own zombie pets.

Players can choose to play with, care for, or torment their zombies in locations like cemeteries, evacuated malls or rundown military bases.