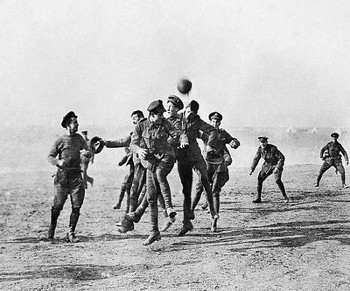 This is The Bible quote in Isaiah 22:13, "let us eat and drink; for tomorrow we shall die", taken to the extreme.

Soldiers and civilians during war will try to have as much fun as they can during their downtime to block out the horrors of war, to escape the violence and recapture the feeling of peacetime. But then there are those who take it to a whole other level: the bombardier who turns up with a hangover, the stoned tank commander, aristocrats trying to deny a war is even happening... This one's for the characters who party to keep their upper lip stiff and morale high and the others, on the dark side of the trope, trying to block out the reality of war altogether.

Glamorous Wartime Singer often features, as does Military Moonshiner. Unlike While Rome Burns, this is for characters who are on the receiving end of war and can be a positive way for characters to keep their sanity. This can be emphasized by the partiers being called to duty during the hijinks, and they instantly snap into solid professionalism for the tasks ahead.

Compare Go-Karting with Bowser for when both sides screw the war and party together, and Holiday Ceasefire if a holiday makes the hostilities take a halt. See Apocalypse Anarchy and Screw the Rules, It's the Apocalypse! for a similar reaction to The End of the World as We Know It.