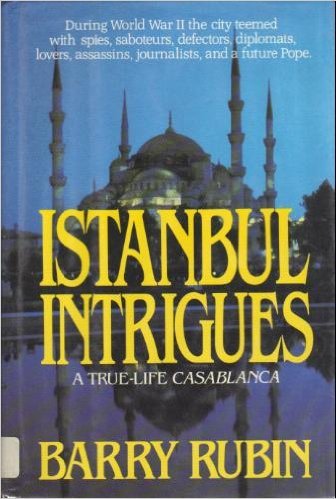 "Istanbul was a neutral city where enemies fighting to the death sat table to table in elegant restaurants listening to Gypsy orchestras. It was a city where a German and an American intelligence agent fell in love with the same Hungarian singer. Those who had barely escaped from lands of bombed-out buildings, shortages, and fear came to a place of bounteous peace. For people daily risking their lives elsewhere, as one of them put it, the most urgent question in Istanbul might be the waiter's query, 'Do you prefer red wine or champagne with your dinner?'"
—Preface
Advertisement:

A history of espionage in Istanbul and the surrounding area during World War II, written by Barry Rubin. It is a better read then most Spy Fiction, and contains a large amount of stories. All of these are true as far as the author can tell (for obvious reasons, this kind of story generally supposes some leeway).The book shows how Turkey remained neutral by convincing everyone of its sympathies. However, its strategic location ensured that every faction had an interest here. Spies clash in both posh hallways and in seedy alleyways. Meanwhile, the war rages all around, leaving Turkey an island of safety.From there the Allies mount secret operations in the Balkans; the Germans mount ops in the Middle East; the Russians and Germans struggle for influence; lesser powers carry out their own intrigues and everyone tries (in a suitably Byzantine way) to find out and outwit each others' schemes. Meanwhile, the Turks watch over the whole thing to keep it from getting out of hand.The book is written in what the Spy Fiction trope would call a stale-martini fashion with evocative descriptions of the life in Istanbul during the war. The combination makes the book much like a film. It is well worth your read.

It is available in both hardback and paperback at Amazon

This work includes the following Tropes: