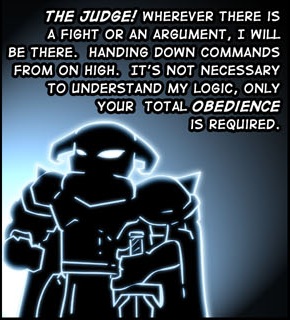 Never mess with a man who knows the rules like the back of his hand.
"My word is the law on the battlefield!"
— Judge robot, Zoids: New Century
Advertisement:

When some authority or power dictates what counts as "fighting fair" and actively enforces these rules on the battlefield. Almost always a neutral party in regards to the fighting itself, they exist solely to make sure the rules of battle are followed and punish those who break them. Their presence is often justified — if the fighting in question is a Tournament or Blood Sport, for example — but they'll just as easily show up in real battle-to-the-death combat, in which case their presence may cause large amounts of Fridge Logic. Liberal application of the MST3K Mantra is recommended. Expect an evil or ruthless character to attack the Combat Referee at some point; this may result in the heroes being forced into a no-rules grudge match, or it may prompt the referee to deal with his attackers himself via overwhelming force.

open/close all folders
Anime & Manga
Fan Works
In the Yakuza / The Rising of the Shield Hero Crossover fanfic The Shield's Dragon, the events of the race between Naofumi and Motoyatsu (for the lordship of Lute Village) from canon is now mediated by the Gauntlet Hero - Kazuma Kiryu, who helps to enforce fair play by beating the crap out of Princess Malty's knights who were attempting to rig the race to the Spear Hero's favor. There will be no cheating under his watch.
Film
Advertisement:
Literature
Roleplay
Tabletop Games
Video Games
Webcomics
Real Life