Always Gets His Man 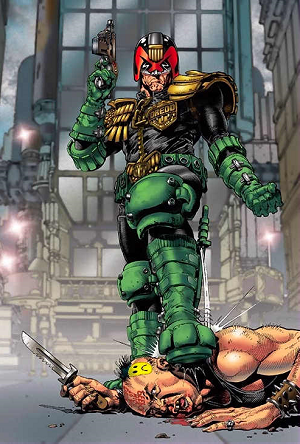 No perp can escape the Law.
[slams jail cell door on fugitive] "That's the last time he'll fish over the limit."note The guy was using dynamite in a protected wilderness area, and there was implied to be a case of There Should Be a Law.
— Fraser, Due South
Advertisement:

This is a cop's cop. He is incorruptible, competent, and feared by evildoers. If he is not Da Chief it is likely because either he is too young, or his path is blocked by Obstructive Bureaucrats who fear him for obvious reasons.

He is often a By-the-Book Cop, though some versions have a bit of Cowboy Cop in them. May be a Sympathetic Inspector Antagonist. If he is an Inspector Javert, he will be portrayed sympathetically as a Worthy Opponent and he is only on the opposite side by an unfortunate error in the system or else because the protagonist is a Villain Protagonist. Often, because Elites Are More Glamorous, this kind of Cop belongs to a famous law enforcement organization: effectively the constabulary equivalent of a Badass Army. He may also be Smith of the Yard.

Very often, he's a Determinator who is Lawful Good— with a strong accent on lawful. Generally a fair cop, though if the protagonist is operating outside the law, he'll pursue him as relentlessly as anyone else. You very much do not want to do something to make him follow you. This type is more common in the Cop Show than the Police Procedural, as the former presents an idealized and actionized version of police work, while the latter more often depicts flawed heroes because of its focus on the system as a whole.

Not to be confused with Super Cop, which is a cop with superpowers (though the tropes can obviously overlap).

The Trope Namer is the Royal Canadian Mounted Police, one of those "constabulary Badass Army" type organizations, thanks to the famous motto: "The Mountie always gets his man!" (It's not really their motto—that's "Maintain The Right"—but it's gotten established in pop culture that way.)

Alternative Title(s): Always Gets Her Man