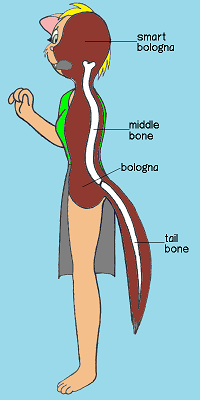 An occasional hazard of cartoon characters is being cleaved in two, lengthwise or crosswise. Chainsaws, buzzsaws, battle axes, laser beams ... something will turn one whole character into two half-characters. Of course, depicting all the myriad structures and tissues in a living body violates The Law of Conservation of Detail and would also look mighty gruesome. Therefore, cartoon characters are made of a bologna-like substance that doesn't bleed and has no annoying details. Hacking a character to pieces becomes bloodless, and qualifies as Amusing Injuries rather than Squick. This also sometimes crops up in live-action works, mainly for similar reasons as above, but also because it can save time and money on special effects; why go to the effort of having blood ooze or showcasing the various shapes and colours of internal anatomy when sometimes, uniform red meat is all you need.

Compare Made of Plasticine, which also involves bodies that lack the details of realistic internal anatomy, but done in a way that increases the Squick factor.