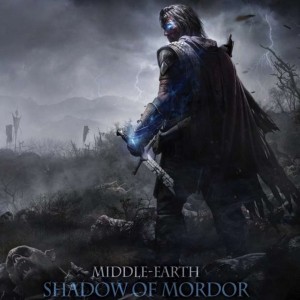 When you stare into the Abyss, the Abyss stares back. - Friedrich Nietzsche
"In the land of Mordor where the shadows lie..."
Advertisement:

Middle-earth: Shadow of Mordor is a Wide-Open Sandbox Action RPG, released on September 30th, 2014, and developed by Monolith Productions and set in J. R. R. Tolkien's Middle-earth. It is available on the PS4, PS3, Xbox 360, Xbox One, and PC.

The game takes place in an Alternate Timeline between The Hobbit and The Lord of the Rings and stars Talion (voiced and motion-acted by Troy Baker), a ranger of Gondor responsible for guarding the Black Gate of Mordor, who is killed alongside his family by Sauron's forces to celebrate the Dark Lord's homecoming. Fortunately (or unfortunately) for Talion, he is revived by the Elven wraith that the Black Hand was attempting to summon with the ritual killing of Talion and his family. Together, they head into Mordor to exact revenge.

The gameplay is a mix of Assassin's Creed's traversal and stealth with combat similar to the Batman: Arkham Series. The standout feature in this game is the Nemesis system, which keeps track of ranked members of Sauron's army and their advancement through it. It also keeps track of the player's relationship with them, where the Uruks will remember their previous encounters with the player and respond accordingly. If a random enemy happens to defeat the player, then he will rise through the ranks, gain a name and a title, and will endeavor to continue his own personal rise towards the rank of Warchief. The player can then encounter them in later events or just randomly happen across them while exploring the world. As they rise through the ranks, they gain strengths and lose weaknesses, so repeatedly losing fights against a specific Uruk can end up creating a rather threatening enemy.

The game was followed up with multiple pieces of Downloadable Content, ranging from extra challenge maps (killing a required number of Warchiefs and Captains, along with bonus objectives which must be completed in order for the score to be listed on Elite Leaderboards), to alternate skins for Talion, to two major quest packs - the first, Lord of the Hunt, has Talion working with Torvin to eliminate several Beastmaster Warchiefs, who have taken control of the local wildlife. The second, The Bright Lord, tells the story of the Wraith and his battle with Sauron. A Game of the Year Edition has been released which compiles all of the DLC.

In Mordor, there's only one way to rise in the ranks.

In Mordor, there's only one way to rise in the ranks.