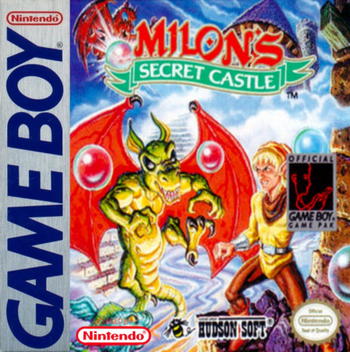 Milon's Secret Castle is a sidescrolling game released on the Nintendo Entertainment System in 1986 in Japan and 1988 in North America, and developed by Hudson Soft. It's one of the least intuitive games of all time, second only to Activision's Super Pitfall. The game was later ported to the Game Boy in 1993.

Your Player Character, the titular Milon, is dressed in a very pixellated representation of blue overalls (or perhaps pajamas) and a blue hat. Your mission is to rescue Queen Eliza, who is held captive by the Evil Warlord Maharito, by struggling through several rooms filled with secrets and enemies. Your means of defense (or offense, as the case may be, although at times you may feel very much more hunted than hunter) is an infinite supply of bubbles. One hit is enough to take down most enemies, although the majority of them require concentration to be hit. Health capacity is small, but Milon can expand it by collecting items resembling honeycombs.

It received a Super Famicom sequel of sorts in Do Re Mi Fantasy, which exchanges the block puzzles for platforming and is only really related in that it also happens to star Milon, who still has his trademark Bubble Gun.